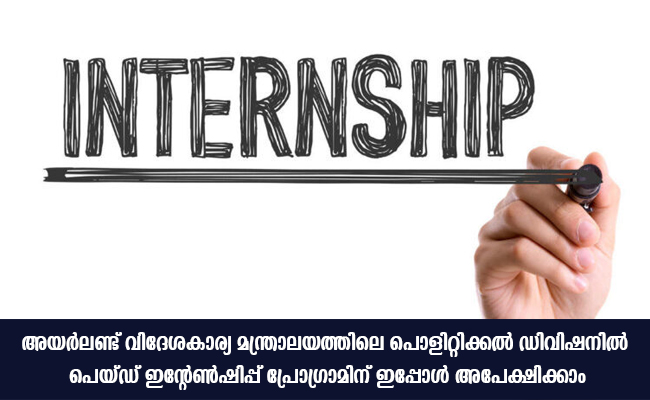 The internship will involve work on a variety of tasks and projects, including:

Internships may arise in one or more of the following units of Political Division, although candidates may also be assigned to other roles within the Division as needs arise:

Please see below more details on the roles of each unit:

Sharing our experience of peace and reconciliation on the island of Ireland is one of the five signature foreign policy priorities in The Global Island foreign policy document. The Conflict Resolution Unit (CRU) does this by working to further enhance Ireland’s contribution to international conflict resolution and peacebuilding. CRU’s conflict resolution and peacebuilding efforts take on a number of forms, focussing on three key areas:

Firstly, CRU supports Ireland’s engagement on conflict resolution, mediation and peacebuilding by building coordinated and targeted engagement and advocacy for peacebuilding efforts including at UN, EU and regional levels. Secondly, CRU supports the implementation of Ireland’s third National Action Plan on UNSCR 1325, the Women, Peace and Security Agenda, which forms a central element of Ireland’s broader commitment to gender equality as a priority in Ireland’s foreign policy, reflected in both The Global Island and the new policy for international development, A Better World.  Thirdly, CRU sits on the secretariat of the Stability Fund. The Fund’s primary objective is to provide support to a range of interventions in developing countries that are complimentary to its over-arching goal of supporting conflict prevention and peacebuilding. CRU manages relationships with a number of its civil society partners, which receive financial support through the Stability Fund. The role of the intern will include preparation of briefing material for the above mentioned work areas; assisting the secretariat of the Oversight Group for the implementation of the National Action Plan; organisation of internal and external meetings; public diplomacy; research; and attendance at events on behalf of the Unit.

Advancing Human Rights is one of Ireland’s five signature foreign policies and we are recognised globally for our commitment to this issue. The Human Rights Unit (HRU) is responsible for ensuring that human rights concerns are mainstreamed into all aspects of Irish foreign policy. We work with other business units of the Department and with our network of Missions abroad to develop and promote our policy positions on human rights issues, particularly at the United Nations in Geneva and New York and within the EU. We also work closely with other Government Departments, both to make sure that what we advocate at an international level is coherent with our domestic policies and also to focus attention on compliance with Ireland’s obligations under international human rights law. Interns work on the preparation of briefing material, analysis and formulation of policy recommendations on human rights items arising in international forums, organisation of meetings and other events and report writing and note taking. Interns may also be asked to attend internal or external meetings on behalf of HRU.

Promoting disarmament is one of five signature foreign policies for Ireland and builds upon Ireland’s historic legacy in this area. From our early efforts at the United Nations in the 1950s which led to the creation of the Nuclear Non-Proliferation Treaty (NPT) in 1968, to our more recent work on the humanitarian impact of the misuse of conventional weapons, Ireland continues to play a leading role in efforts to promote disarmament, non-proliferation and the regulation of new weapons. Ireland is party to a number of international agreements that seek to eliminate certain categories of weapons, or ensure that their spread and use is controlled.

The Middle East and North Africa (MENA) Unit is responsible for political, trade and bilateral issues in relation to the countries of North Africa and the Middle East. The unit formulates and implements Irish policy for a number of highly volatile and politically sensitive situations, manages economic and trade relations with MENA countries, and supports the work of the Department’s Embassy network in the region. The role is varied and flexible, but the majority of the intern’s time is spent responding to representations and Parliamentary Questions on Middle East issues in line with the Department’s policy positions, writing briefings on countries in the MENA region, preparing for Ministerial visits, and trade and human rights work.

Completed application forms should be marked Political Intern Application in the subject line and addressed to polintern@dfa.ie. The deadline for applications is strictly 17:00 (Dublin time) on 3 May.

Applications received after the closing date for applications will not be considered.

The pay rate applicable is the first point of the Executive Officer salary scale. There is no entitlement to Civil Service status.

Selection will be on the basis of a written test and competitive interview. If a large number of applications is received, candidates will be short listed for interview on the basis of information supplied in their application. Interviews will be conducted via video conference.

Citizens of non-European Economic Area (EEA) States are not eligible to compete.  The EEA consists of the member states of the European Union along with Iceland, Liechtenstein and Norway. A candidate who is in doubt in this regard should consult with the Department of Business, Enterprise and Innovation.

Candidates who have previously undertaken an internship or employment of six months or more in the Department of Foreign Affairs or in an Irish Diplomatic Mission abroad are not eligible to compete. Successful applicants will also be ineligible for any future intern positions which may arise in other areas of the Department, including the Junior Professional Internship programme.

Please note that due to the restricted nature of the work, the internship with the Disarmament and Non-Proliferation Unit is open to Irish citizens only.

The Department of Foreign Affairs is an Equal Opportunities Employer.

It should be noted that any attempt, direct or indirect, by or on behalf of a candidate to influence the selection process will automatically disqualify the candidate.